Your Destiny Is Not Determined By Your Critics

"There is only one way to avoid criticism:
do nothing
say nothing
and be nothing."
- Aristotle

Everyone will encounter criticism sometime in their lives. Sometimes we will be criticized fairly but most often unfairly. Certainly constructive criticism can be helpful.

Unwanted criticism is most often based on jealousy and we must always remember that such criticism is more a reflection of the critic than of the person being criticized.
Instead of being happy for you some people will criticize you because you have something that they want. What they don´t realize is that they can also have what you have got.
A lot of times criticism comes from a competitive spirit. Some people try to cover up their own insecurities by being critical or cynical towards others.
Unfortunately not everybody will celebrate your victories with you and the more successful you become, the more criticism you will encounter. 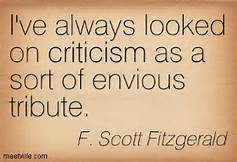 Here are a couple of tips on how to handle criticism.

Never take it personally.
It is never about you. If the critic is not tearing you apart they will try to tear someone else apart. That is just simply what they do. There is something on the inside of the critic that will make them lash out, and unless they deal with it, it will prevent them from rising higher.
Haters will always hate.

Don´t start thinking that you will get even.
Don´t try to pay them back for spreading untruths about you. Never dwell on what the critics are saying about you and don´t let it upset you and never become revengeful. Never sink down to their level and don´t become defensive and try to prove that you are right and that your critic is wrong. Don´t allow them to stress you out.
Just shake it of and keep on moving forward.

Stay focused on your dream and your goals.
You don´t have time to sit around and talk about all the people that don´t like you. Time is valuable and don´t waste it trying to please everybody. You don´t have time to explain yourself and your dream, and you can´t win over your critics. Not everyone will be excited about your dream and not everybody will understand
Stay focused on your goals and don´t waste your precious energy on others. People will judge you no matter what you are doing.
It is not your job to convince others to change their mind.
Your gift and your purpose is to inspire, motivate, encourage and challenge people.

If you are making a difference in the world you will always have you share of critics.
Just remember that the higher you go, the more visible of a target you will be and the more critics will want to take a shot at you.
Don´t allow some narrow minded people discourage you from taking it all the way to the top.
Don´t change yourself or your dream. Move forward and shake it off. 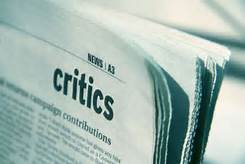 Posted by Karin Glannstam at 12:22 AM