Is It Really True?

No matter how many people believe or don't believe in you,
you must be the ultimate believer in yourself. 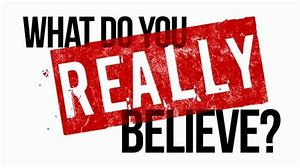 Have you ever stopped yourself and thought about where your beliefs and views actually came from?

Where is your belief coming from?

Is it a belief that came from you?

Or are you believing what you believe because it came from your parents? Maybe your spouse? Your boss? Co-workers? Your friends? Or society?

Where did this belief come from and why do your believe it?

Maybe it's about time to start looking at some of those old views and beliefs that you have? Are they really true?

As you try to find out why you hold these views and beliefs many of your old views will fall to pieces.

Form a clear and definite idea regarding your convictions as to why you do and to why you think as you think.
You know, most people never really never examine their views and then ask themselves …..why do I believe that?

I bet a lot of the beliefs that you are still holding onto you have inherited. They were built into you by your parents, their parents and their patents. Some of them go way back and they have been built into your genes. 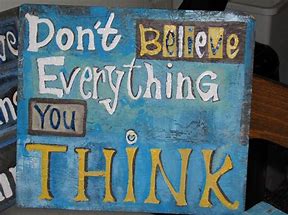 Why do you continue to do the things that you really don't want to do? And why don't you do what you really want to do?
Is it because of some old belief that you have of yourself? Are they yours? If not....where did they come from?

The thoughts, views or beliefs that we repeatedly think will become fixed in our own mind and then these thoughts and beliefs are going to determine what happens in our life. 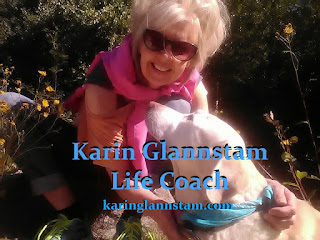 "We can never obtain peace in the outer world,
until we make peace with ourselves."
- Dalai Lama 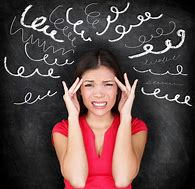 Are you overloading yourself with responsibilities, getting busier and busier so that you don't have to feel?

Are you trying to do everything you can, so that you don't have to deal with pain?

Are you just making it through the day and through life, living in anger, blaming society, yourself and blaming everyone else?

You can continue to be busy for the rest of your life constantly trying to escape and avoid the pain....but is this starting to cause a lot of stress in your life? 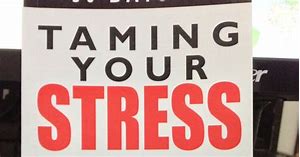 Here are a few tips!

Change your  perception of stress.
You can continue stay busy for the rest of your life and avoid the pain. Bur avoiding the pain usually with some form of addiction will only wreck bigger havoc in your life down the road.


Learn to set boundaries with people.
Guard your ME-time. Tell your spouse, family, friends that this is your time and Don't Disturb. You ME-time can be anything you choose. Like exercising, meditation, yoga, reading a book, listening to a podcast, slow walk in the park or simply just sitting still and reflect. You decide the activity and for how long. Practice self-care and remember that self-care isn't selfish. It's an investment in yourself. You will show up more effectively for yourself, others and also the world, when you feel more centered, more at peace, and less reactive.

Setting boundaries is learning to say NO. If you constantly continue to say yes to others, your body will eventually say NO to you, usually in the form of some kind of illness.


Time to change the perception of time.
A lot of people feel like they are so busy and that there is never enough time.
The truth is that we all have the same amount of time per day. The difference is your attitude towards managing your time.
Is it time to change your perception of time? Maybe you must learn some new time management routines so you can learn to run the day instead of the day running you? 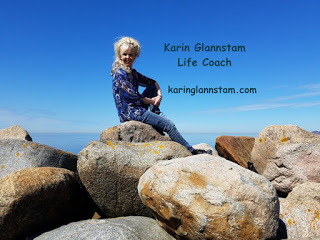 Posted by Karin Glannstam at 1:48 AM No comments:

We Are Much Better At Causing Hurt Than Feeling Hurt 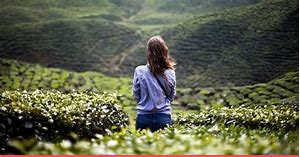 Are you trying to offload your pain onto someone else?
Or do you find yourself in the pantry looking for some carbs to calm your nerves?
Or are you reaching our for a glass of wine or two?

When something happens in our life that makes us react, that energy doesn't just disappear into the air. Every time that we feel hurt, angry, guilty, embarrassed or ashamed we are usually going to do something with that energy. Some of us will end up in the pantry but some of us might pass that energy onto the next person.
Have you ever done this.....someone gets angry at you or makes you feel hurt or guilty and immediately you lash out at them..... or you walk away and later you take it out on someone else, like a co-worker, spouse, child,  friend or dog? Most people off load their pain instead of feeling it themselves.
Ever heard the saying..... "Hurt people will hurt other people"?

Have you ever worked for someone who acts like this? Or maybe you were raised by a parent like that? Or maybe you have been in a relationship with someone like that?
That is egg shell environment.

Back in 2010 when I was in a relationship with a narcissist, this happened pretty frequently. I could say something innocent, but without knowing, I triggered a button within him and he could go off in a rage attack. Sometimes it could be my tone of voice or I might have been looking at him in the wrong way and he would fly off the handle. Not a great environment to be in. Very stressful because it didn't matter what I said or did, he would be triggered and lash out at me. I left that man in 2012 because no matter what you do when you are in a relationship with someone like that, you are always walking on thin ice. This man was a lot better at inflicting pain onto others instead of dealing with it himself. And the truth is, I had nothing to do with his anger, hurt and pain. Those were wounds that  had been inflicted on him as a young child and that never got healed during adulthood.

When it comes to anger, blame, avoidance or hurt, people will push it down so far and at a later date they will explode when there might just be an innocent comment made by someone. This seemingly innocent comment is enough to send them into a rage.

Also some people will push it down for so long that finally their body can't handle it anymore. Your body will always keep the score and eventually it will turn on your in the form of an illness. Or depression, anger, anxiety, fear or problems with sleeping. You body is taking in that energy all the time and then the energy gets stuck in the body, creating all kinds of problems, later in life.

What can we do when we get triggered or when our buttons get pushed?

First we have to acknowledge that our button has been pushed.
Then we have to realize that something emotional is going on.
We must get curious about our emotions.
What does it mean? Why am I feeling this way? Where is it coming from?

Are you going into an old crazy story about what is going on, or are you willing to look at why you are emotionally hooked, hurt or stressed out about it? Is there something that you need to figure out?

Realize you have been triggered.
Lean into the pain and the hurt..... instead of trying to escape it or unload it on someone else.
Be crious about it. Figure out what is going on.
Find the truth instead of going into your "crazy" story. 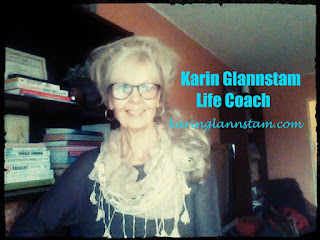 Posted by Karin Glannstam at 1:11 AM No comments:

Today I have decided to change things up a little bit.
Instead of a BLOG post I will give you some "Nuggets of Wisdom" for you to ponder on today and hopefully for the rest of the week.

I hope you find these "Nuggets" insightful, mind opening and inspiring. 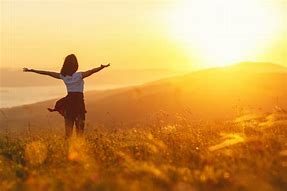 1 - No matter how much experience you  have, we all feel doubt and anxiety when we are creating new things or share ourselves in front of others.

2 - The key to create any habit, healthy or unhealthy is consistency.

3 - If you remain positive in the face of an obstacle, it will motivate action instead of submission and you will conquer the obstacle.

4 - Successful people have more than education and experience. They have great habits and great attitudes.

5 - Attitude creates the way you feel about people and situations. Your actions are a result of your attitude, which in turn creates a reaction from others.

6 - There are no short cuts to any place worth going.

7 - Never be too big to ask questions, and never know to much to learn something new.

8 - You must have an open mind to the awesome possibilities and opportunities out there.

9 - If your desk is messy, your mind may be more frantic and cluttered.

10 - In the end it's how we feel about ourselves that will provide us with increased courage and creativity. 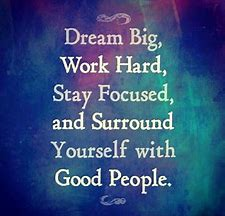 11- Realizing how valuable we are will play a major role in our lives. Our self-worth makes a difference in being active or lazy. If we don't feel good about ourselves, we won't seek advantages and opportunities to make our lives better.

12 - Having inner resources to deal with the ups and downs of life, whether it's reliance or inner strength, will give you an advantage against stress.

13 - Life doesn't demand perfection. It simply requires that you keep showing up.

14 - Feeling anxious or nervous or afraid doesn't mean you are not "good enough" to do what you are about to do. It is usually an indication that you are doing exactly what you should be doing.

15 - Courageous patience is the willingness and the ability to stay the course in the face of uncertainty, doubt and after criticism from others.

16 - You have to take great care of yourself. Not only will you be healthier but you will be more productive and when great ideas and when opportunity comes your way, you will be ready to take advantage of the success or idea.

18 - Realize when others treat you badly, it's not about you, but about their own suffering.

19 - The road less travelled is full of obstacles, steep inclines, detours and distractions. But it's the only true path to success.

20 - Your future is not determined by luck. It is determined by your willingness to make small investments consistently in the direction of your dreams. 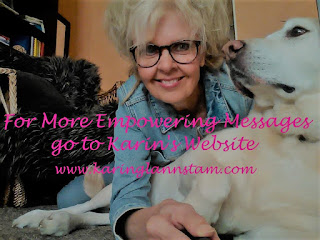 
Posted by Karin Glannstam at 12:51 AM No comments: