A New You - The Story About Ditto, The Dog

"The new year will be like the old one
if you keep on doing the same old things."
- Jean-Paul Mafatti

A dear friend of mine has a dog and his name is Ditto.
He is three year old Springer Spaniel. Wonderful dog, except for one thing, he is not disciplined at all. He is full of energy, just like you would expect an adolescent is going to be. But not being disciplined is creating a pretty big problem in his life. He constantly jumps on people and he is big and powerful enough to knock you down. He doesn't listen to anything you tell him to do. Basically, he runs the show, around my friends house. Not good. 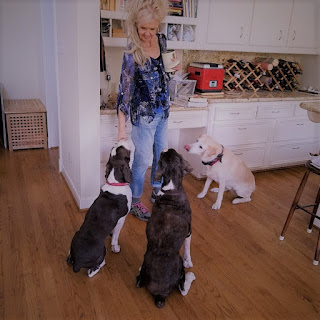 Now we know that there usually aren't any bad dogs, just bad dog-owners. It isn't his fault that my friend hasn't take the time to discipline him. I have to admit that my friend is a little on the lazy side ( I hope she isn't reading this blog) and she doesn't want to take the time to teach him. She doesn't have the patience either to follow through on her discipline. Don't get me wrong, this dog is very loved and well taken care of and Anne is a wonderful person and a great friend.

Cesar Milan, also known as "The Dog-whisperer" on TV,
always talks about how a dog needs three things to live a happy and balanced life and those three things are 1. exercise, 2. discipline and 3. love. They need all three. And if you have ever watched his show you will soon realize that most people are great at giving love, some exercise but very seldom do they want to disciple their dogs. And this is why Cesar Milan has a lot of work to do with the dog-owners. It's the dog-owners that need the training, not the dogs. See the thing is,  dogs love discipline and they love routines. It makes them very happy and fulfilled. (same thing with humans).

In the beginning the dogs might fight you for a while when you are starting a new program with them that now includes discipline. You must be patient with them because they have been able to do whatever they wanted for a long time, and all of a sudden they are not able to do it, and they now have a new daily routine. And the things that they did before, they are no longer allowed to do. It can be a little confusing to them in the beginning.

My friend Anne asked me to help her with her dog Ditto. He needed more discipline in his life. I took him on as my new project. To be honest with you both my friend Anne and Ditto both need discipline in their lives.
At first Ditto fought me like crazy. When I took him on walks, he didn't want to walk on a leash or do anything I wanted him to do. But I am stubborn and I have patience, and I have also trained a quite few dogs of my own, so I knew what to expect. It got a little easier as the days and weeks went by. But somedays he didn't want to do anything and simply refused. The next day he did a lot better. It is taking some time, but overall he has gotten a lot better and he is well on his way to becoming a very well behaved dog. Now I just have to go to work on my friend, Anne. She too have to become more disciplined herself and also she must now enforce the new disciplines or Ditto will eventually just go back to being a stubborn dog and he will probably be and running the household again. And we don't want that to happen.

By now you are probably wondering where I am going with this story about my friend Anne and her dog, Ditto? 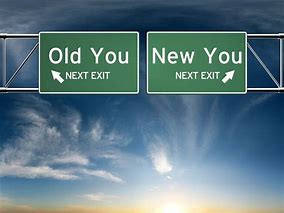 It's the same thing in our own lives, as human being. Here is an example of what I am talking about.
Maybe you have been eating wrong for many years and you decide that you are now going to start eating healthier and start exercising. In other words you are going to develop a few new disciplines in your life, on a daily base.
First your "old you" is not going to like the new disciplines but your potential "new you" is fighting back and trying to keep the "old you" on track with healthier habits. Some days are easier than others. All of a sudden one day you are taking several steps forward, but then a few days later, something happens and you are now back to where you were a week or two ago. You feel frustrated and sometimes you might even want to give up because you can't see any change.

Progress and new disciplines take time to develop and you have to be very patient with yourself. But at the same time the new disciplines makes you feel better. You are happier and your life seems to be a little easier.

We are all very much like the dog Ditto, that I am talking about. It's hard to learn new disciplines when you have been able to do whatever you wanted to do, when you wanted to do them.
Yes, it's hard to get off the coach in the evening, and go for a walk or go to the gym, especially since you have been on it for years watching TV every night.
It's hard to quit eating the hamburgers or the ice-cream and instead choose a salad and some fruit for dessert. It's difficult in the beginning because you don't see any changes and you might even think that you are an impossible case, and that it's too late for you to accomplish your dream.

But you have to keep on going. You will eventually see great results. Maybe not as fast as you want them to happen, but I promise you..... they will happen. Unless you quit your new routine and give into the "old you."
In the end it's all  worth it. A few new disciplines implemented on a daily base will make your life so much easier down the road.
Do the work today and then live like a champion later.

My work with Ditto isn't over with. But now I also have to go to work on his human, Anne, because she needs to continue the disciplines on a daily base or Ditto will go back to his "old self"' and we definitely don't want that. 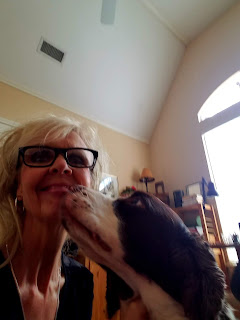 It's like a constant fight in the beginning between the "old you" and the "new you" that wants to emerge.
Yes, it takes a lot of work and self discipline. It's simple to talk about new disciplines and new plans for your new life but it is not always that easy to make it happen . The "old you is fighting hard to keep you were you used to be while the "new you" is showing you a better and more empowering  way to be and to live. Make sure that the "new you" wins. Even thought some days you might want to go back to the "old you." If you get knocked off your new path and end up in the ditch, just make sure that you will not stay there too long.
Simply, get back on track on the journey of becoming a better, happier, healthier and more empowered "new you."

"If you want something new,
you have to stop doing something old."
- Peter Drucker 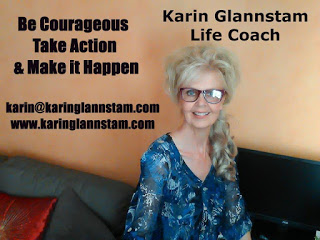