Getting Through The Fence Of Fear

My first dog was a Labrador retriever named Holly. It was in the early nineties and I absolutely loved that dog. But when she was a young dog she loved to dig in the yard. Looking back on it now I believe that she was just bored and that she just wanted something to do. On one side of the fence lived another dog and they both dug from each side of the fence to try to meet each other. After a while we finally had to put up an electric fence at the bottom of the tall wood fence to keep Holly from digging and trying to get out of the yard. It helped and she learned quickly to stay away from the electric wire because it would give her an electric chock and that would give her some pain. Holly learned that to avoid the pain she needed to stay on a certain distance from the fence and don't try to get to close to it ever again. Because if she did it would certainly give her pain and make her feel uncomfortable.


Everything you ever wanted is on the other side of fear


This is also true for us humans. As long as we stay within our comfort zone, we usually won't feel any pain or get hurt. But remaining in our comfort zone will eventually choke the life out of our souls. We want to try new things, grow, learn, meet new people, take on new jobs, start new businesses, meet new life partners, make new friends. But we know that this will involve certain risks and also taking a chance that it might not work out. In other words, getting chocked by the electric fence.

Instead we remain at a safe distance from the electric wire, just like the animals do. We continue to dream of bigger and better things, but actually getting to those things means having to go up against the electric wire, feel and endure the pain for a while in order to get to the next level of our lives.
You know if you just walk up to the fence, feel the discomfort and then continue to move on, the pain and the uncomfortable feelings will soon dissipate.


Fear kills more dreams than failure ever will


This past month I have been dealing with a somewhat painful situation. I have been unloading a lot of things in my life in order to be able to move on and get to where I want to go. By now I have done this many times and you think that it would have gotten a little easier. But NO, it hadn't.
Even through it was change that I, myself chose, it was very painful, sad and downright uncomfortable. But stepping out into the unknown is seldom easy and it requires a lot of courage.

It's mentioned a lot that courageous people somehow don't feel fear. Not true. They feel the fear but they decide do go ahead and do what they want to do anyway, despite the fear. They know that they just have to get passed the electric wire for a little bit. Feel the pain for a while. And they also know once they have endured the pain for a little while, they will be on the other side of the fence and there anything is possible.

So, I did what I had planned to do for a while. In order to get to the next level I had to unload some things that were weighing me down. I was excited to do this because I knew it would help to get to the next level.
Sometimes we have to unload things, people, an old job, a relationship that we have outgrown. Maybe we need to move away from the town or the city that we live in for a while to get to start a new more exciting chapter in our lives. Or maybe even move to another country.


To escape fear you have to go through it


During this past month I was brushing up against this electric fence many times. Yes, it was painful. And yes, it was uncomfortable. But I also knew if I persisted, I would be able to push on through the fence and the pain and eventually get to the other side. And I am happy to announce that I did.
But towards the end I really felt that my own mind was playing a trick on me. It felt like my brain got hijacked by all the fears and all the "stinking thinking" of all the things that could go wrong and why I just needed to remain where I was and play it safe. But I knew that it was my brain trying to protect me from danger and letting me know that I better not try to get to this new level.

I kept on pushing and I am happy to announce that even though the pain was uncomfortable, it didn't last too long. I got up to the fence and then I pushed through.
Now I am on the side of the fence and when I reflect back on the experience I am so excited and proud of myself for sticking to my vision and my goals and for enduring the pain while getting to get to the other side of the fence.


You gotta get through your fear to see the beauty on the other side. 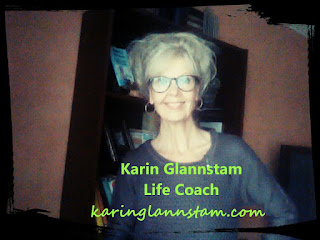 Posted by Karin Glannstam at 7:14 AM